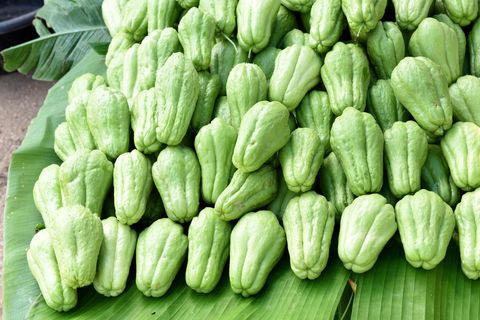 Some of you may have seen in your box something that looks like a very bumpy pear! This is in fact a Chayote Squash! It also goes by names such as the vegetable pear or the mango squash! In terms of flavor, it is very light and sweet with notes of cucumber to it. The skin on the squash is edible, but not as tender as the center of the fruit so it is advised that you use a peeler to get the outer layer off.

HISTORY: The Chayote Squash originates in Central America and was originally cultivated by the Aztec's and Mayan's. Explorers visiting the area were then able to spread the Chayote all over the world, including the Caribbean, South America, and Europe! Later on down the line the squash was spread to different parts of Asia, Africa, and Australia as well, so it truly is a world wild veggie!

1. Raw: One of the easiest ways to prepare Chayote is to peel it raw, julianne it, and put it on top of your salad for a nice crunch! Add some lime, a little mexican seasoning like Tajin, and olive oil and you've got yourself a super fresh Mexican cuisine inspired salad!

2. Soups: Chayote does very well in soups as it is light but can handle bold spice flavors, so you can really play around with your intensity of flavors. I have personally just chopped up some chayote and cooked it in some home made chicken broth and then added some fresh herbs at the end. Great soup for those of you that are sick and want something easier to break down. And it can be easily swapped for vegetable broth to make it vegan/vegetarian.

3. Roasted: My favorite way to introduce myself to any kind of new vegetable is to roast it! You really get the full flavors and can see how the vegetable interacts with heat. Simply peel and chop your chayote, toss it in some olive oil and black pepper, and then bake off at 375 for about 15 to 20 minutes. You can add salt to the roasted vegetables, but only do so AFTER the roasting is done. Salt added before can actually draw water out of plant cell wall through Osmosis. This means for water heavy vegetables such a Chayote, the roast can come out more dehydrated and burnt on the outside with a very poor texture. Little science lesson for ya!